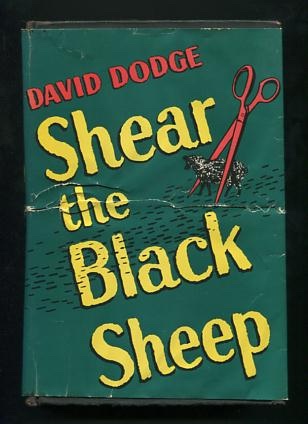 [ex-rental library book (with large informational stamp of Guild Libraries, Hollywood CA, on ffep), well worn, front hinge starting, etc.; jacket trimmed slightly along top and bottom edges (making it a little bit shorter than the book itself), plus it has a weird horizontal wrinkle/crease all the way across the middle]. Rather weirdly (since it's a rental library book) SIGNED by the author on the ffep. His second novel, also the second to feature his detective creation, James (Whit) Whitney. In this adventure, the San Francisco-based Whitney takes a job in Los Angeles "in a weak moment," unhappy because it means he'll have to break a date with Kitty, "the best-looking girl in San Francisco." Down in nasty old L.A., "Whit tangles with the bad company, gets the punch in the nose he was afraid of, punches a few noses himself, looks into the business end of a gun once or twice, and finds out that Kitty is not the kind of girl who can be stood up with impunity. A lot of other things happen, including a murder, two or three trips to jail for almost everyone concerned, and a New Year's Eve spree in Hollywood's hot spots." Signed by Author