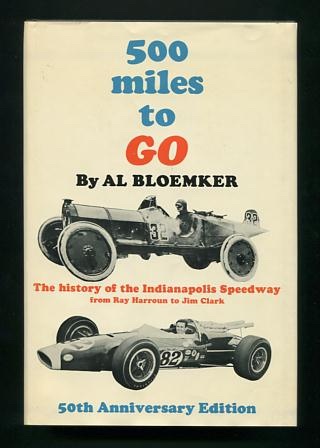 500 Miles to Go: The Story of the Indianapolis Speedway

[light foxing/spotting to page edges, no other significant wear to book; jacket has a one-inch indentation (like a short wrinkle) in the spine, some minor soiling at the edges of the flaps, otherwise bright and clean]. (B&W photographs) "Completely revised and brought up to date, with new photographs added," this 1966 printing (of a book originally published in 1961) "also takes into account the drastic changes which have revolutionized the sport [in the interim]. Lightweight rear-engine cars have toppled the reliable Offanhauser roadsters from their dominant position in championship competition -- a development climaxed by Jim Clark's sensational victory in 1965." Includes an appendix giving the top ten finishers in each race from 1911 to 1965, together with the winners' times and average speed. (And because I know you're wondering: that speed in 1911 was 74.59 mph.) This edition would seem to be markedly scarcer than the 1961 original.

Title: 500 Miles to Go: The Story of the Indianapolis Speedway

500 Miles to Go: The Story of the Indianapolis Speedway