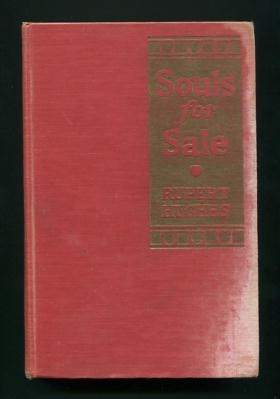 (no dust jacket) [reading/research copy ONLY, with heavy fading to edges of both covers, water-staining on endpapers; for all that, though, it's a solid copy (hinges and binding intact) with only moderate shelfwear, and internally clean]. (4 B&W film stills) An early Hollywood novel -- one of the first, in fact, by a writer who could legitimately be called a "major author" of his day, although his style has not aged well and he is little read today. The story concerns a small-town minister's daughter who rejects her father's religion, runs away from home, and through a combination of misadventure and happenstance encounters a movie company on location in Arizona, which in turns leads to her becoming a movie star. (Yes, it's just about that plausible.) Hollywood novel bibliographer Anthony Slide observes that the book was unusual in that it wasn't an expose of scandalous, wicked Hollywood, but rather portrayed it "as just as much a regular American community as any other, undeserving of the criticism leveled at that time." The only problem with that analysis is that the paradigm of the Hollywood-novel-as-scandalous-expose wasn't yet fully established in the early 1920s, so the positive slant of the book wouldn't have seemed nearly as unusual then as it would, say, twenty years later, after a raft of writers like Horace McCoy, Nathanael West, Liam O'Flaherty, Steve Fisher, Budd Schulberg, and the Graham brothers, to name just a few, had flipped Hollywood on its back and exposed its ugly underbelly for all to see. Hughes himself, one of Samuel Goldwyn's "Eminent Authors," and a longtime Hollywood denizen who certainly knew the landscape, adapted his book for the screen in 1923, with Eleanor Boardman in the lead; this edition is the "photoplay edition" tie-in for that production. (Goldwyn even let him direct the film -- who ever heard of such a thing?!)