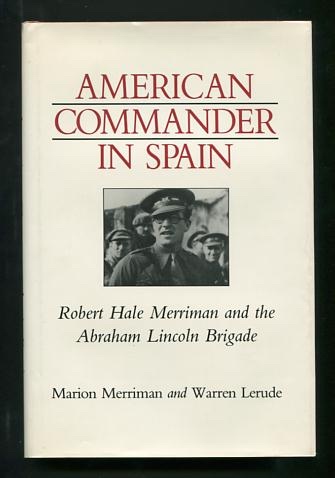 By: Merriman, Marion, and Warren Lerude

[spine slightly turned, tiny spot on fore-edge; jacket shows just a trace of handling wear, faint stain at bottom of rear panel]. (Nevada Studies in History and Political Science, No. 24) Series (B&W photographs) "This unique biography provides the reader with a rare view of Robert Hale Merriman, the first combat commander of the Abraham Lincoln Battalion, and a major figure in the Spanish Civil War. According to John Kenneth Galbraith, Ernest Hemingway based his character Robert Jordan in For Whom the Bell Tolls in part on Robert Merriman. On the 50th anniversary of the start of the Spanish Civil War, Marion Merriman recounts how she and her husband Bob found their way to the anti-fascist fight in Europe in the late 1930s [and how] Merriman joined volunteers from 54 countries who organized themselves into the International Brigades."