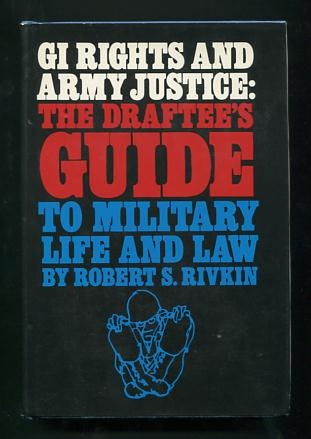 GI Rights and Army Justice: The Draftee's Guide to Military Life and Law

[nice tight clean copy, very slight bumping to a couple of corners; jacket shows light surface we Openly labeling the U.S. Army "an oppressive force," the intent of this book was to inform the ordinary GI "why the Army subjects him to the indignities, brutalities, and injustices that he used to associate only with totalitarian regimes." Toward this purpose, the author "has drawn upon an extensive array of factuall, legal, sociological and psychological materials, blended them with his own experiences in the Army, and produced in one volume both a clear and constructive soldier's guide to survival and a stinging indictment of American militarism." A Vietnam-era classic, and a book whose publication would have been literally unimaginable during any previous American war. The author was an attorney who was himself drafted in 1967, and was stationed at Fort Polk, Louisiana (where he provided legal advice to young trainees bound for Vietnam), and later in South Korea, where he defended soldiers in special courts-martial.

GI Rights and Army Justice: The Draftee's Guide to Military Life and Law