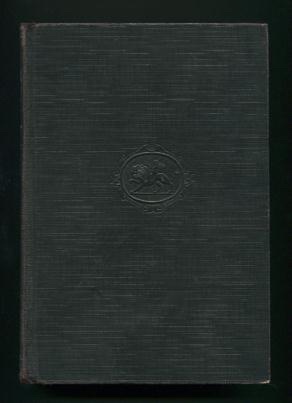 (no dust jacket) [moderate shelfwear to bottom edge, front board slightly exposed at corner, a bit of surface deterioration to cloth at spine ends, light rubbing to silver spine lettering (still easily readable), ffep removed, colorful vintage bookplate on half-title page]. Burnett's fourth published novel, by far the most obscure and hard-to-find of his early books -- and a classic example of how a work by a notable and successful author (and Burnett had become notable and successful right away, with the publication of his first book, "Little Caesar," in 1929) can fade into obscurity for no other apparent reason than because nobody ever made a movie out of it. (It's the only one of Burnett's first six novels that's never been filmed.) I've seen the book referred to as a "follow-up" to "Little Caesar," but that's only true in the sense that it's also set in Chicago (and in fact on the original dust jacket it's heralded as "A Chicago Novel"). It's not even really a gangster novel, although the underworld does play a part in the narrative, which is primarily about a successful restaurant/club owner, a self-made man with ambitions to rise in the society world. But if you were a successful restaurant/club owner in Chicago in that era, you'd inevitably find yourself rubbing shoulders with the town's rougher elements, and between its somewhat low-born protagonist and some of the characters he gets involved with, there's a pretty decent quotient of hard-boiled, tough-guy talk to keep things snappy. The milieu is also evoked by the book's dedication -- "To the Wilson and Oak Gang, 1915-1918" -- although the significance of such a "gang" (if it was) has so far eluded my research.