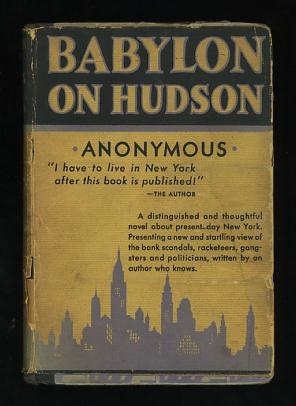 [a pretty beat-up copy, probably an ex-rental library book although NOT stamped or marked as such in any way; the dust jacket, however, is backed with brown paper and thoroughly glued down at the flaps, which was pretty standard practice for such libraries; in any case, the book is heavily worn (but internally clean and with its binding intact), and the jacket is, well, a mess]. The author of this "distinguished and thoughtful novel about present-day New York" thought it best to cloak himself in anonymity, so "that the personages with whom he is acquainted will not be embarrassed by his presence." (Sounds like the lesson that Truman Capote never learned.) The book's action takes place from mid-1929 to late 1931, a period which in the author's opinion "in a most dramatic way indicates the disintegration of our social system." Written "in the racy speech of the day," the book presents "a dramatic flashlight picture of the hypocrisy and graft -- financial, criminal, political -- characterizing our society." The New York Times reviewer, while finding the book narratively sketchy, was nevertheless impressed by its range, commenting that "under their own names or easily recognizable pseudonyms numerous legal lights, political sachems, millionaires, professional liberals and reformers appear, either in person or by name," and that "most of New York's institutions and celebrities and notorieties of the past three or four years come in for at least passing comment."