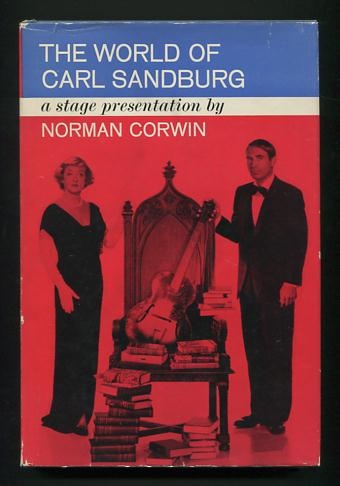 The World of Carl Sandburg: A Stage Presentation [*SIGNED*]

[slight deterioration to cloth at bottom edges of covers (boards just a tiny bit exposed in a couple of spots), slight surface wear to upper right corner of front cover; jacket shows some wear along spine, especially at top and bottom corners, a couple of tiny closed tears at top of front panel]. (B&W photo frontispiece) INSCRIBED and SIGNED by the author on the ffep. Corwin's voyage through our world, as seen through the prism of Carl Sandburg's poetry. This show, which toured for 21 weeks to (mostly) critical praise in the first half of 1960 -- but lasted less than a month on Broadway that fall -- grew out of an all-star tribute to Sandburg that was staged by Corwin at UCLA in 1958. The re-imagined show drew material from ten of Sandburg's published volumes, along with eighteen new Sandburg pieces, which appeared here in book form for the first time; Corwin also "prevailed on Sandburg to comment on each selection, and the resulting dialogue is included." The headliners of the re-imagined show were Bette Davis and her then-husband Gary Merrill, pictured on the dust jacket and in the frontispiece in photos by the great Hollywood photographer John Engstead. Signed by Author

Title: The World of Carl Sandburg: A Stage Presentation [*SIGNED*]

The World of Carl Sandburg: A Stage Presentation [*SIGNED*]