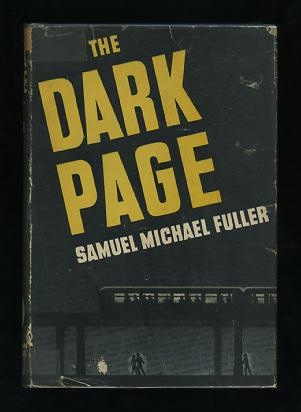 [solid copy, very slight fraying to one top corner, small embossed previous owner's stamp on ffep and half-title page, fading to cloth at very top of spine, a handful of "puncture wounds" (small indentations) in spine; jacket shows general wear, and has been tape-repaired and -reinforced at several points, including a brown-paper-tape patching of half-inch paper loss at top of spine (partially affecting title)]. What might be called Fuller's "breakthrough" novel (after a couple of cheapie efforts in the 1930's), a slam-bang mystery set in the New York tabloid milieu where the screenwriter/director had cut his pulp-narrative teeth. The rear jacket flap features a photo of Fuller in uniform, with a self-written bio that sounds like a dispatch from the front: "You can tell them I'm 32, started running copy on the old New York Journal in short pants, was Brisbane's copy boy, which I'd rather have been than president. He predicted I'd develop into a 9th grade reporter. He was right. Worked on now-buried Graphic as police reporter, and on San Diego Sun as a waterfront reporter. Wrote a few novels, wrote about a dozen yarns for the screen in Hollywood. Am now a corporal in the United States Army." By Fuller's own account -- barely fictionalized in "The Big Red One" (book and film) -- he first encountered his own novel in published form in Europe, shortly after D-Day, when he observed another GI reading the Armed Services paperback edition. The book was filmed in 1952, as SCANDAL SHEET -- but not by Fuller, who was simultaneously at work on his more personal paean to the newspaper biz of an earlier day, PARK ROW.