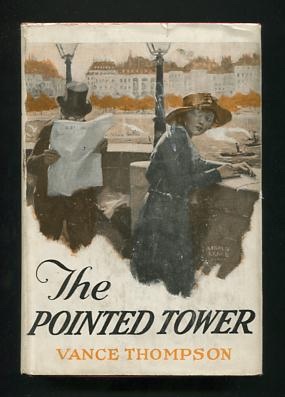 [tight clean book with just the teensiest trace of shelfwear, remnants of old price sticker on rear pastedown; jacket lightly soiled, with a handful of tiny edge-tears, no paper loss]. (B&W frontispiece, 3 B&W plates) Monsieur Guelpa, in solving "the most baffling murder mystery Paris had ever known ... goes deeply into the lives of the great French family involved, lays bare their romances, their relations with one another and with the public, the sources of their wealth, the reasons for financial embarrassment, the count's rich marriage in America, his wife's early love affair, the intrigues of domestics." (Wow, who does this Guelpa guy think he is, Lew Archer?) Thompson, primarily a literary critic and poet, turned his attention to mystery fiction for the first time with this late-career novel introducing Mr. Guelpa, "the famous French detective" (with no first name, it would appear). Thompson did a couple of other books in the genre, but the only other "Mr. Guelpa" novel (and that was its title) was published in late 1925, a few months after the author's death in June of that year -- hence the "series," if you can call it that, consists of just two books. (We also have a copy of that second and final installment for sale as of this writing, making ReadInk perhaps the only bookseller in the world to be offering the entire "Mr. Guelpa" series!)