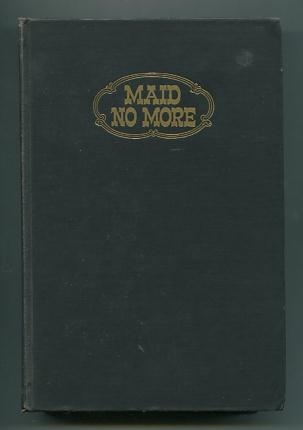 (no dust jacket) [light bumping and slight fraying at several corners, minor soiling to edges of text block, light spotting to spine cloth, one light spot on front cover, remnants of removed labels on both front and rear endpapers (suggesting that this may have once been a rental-library book, although not marked as such in any overt way)]. Novel set in the 17th century, about a female preacher who is sent as a missionary to the Barbados, and finds herself in a spiritual struggle between her devotion to God and her attraction to a brazen young exiled Royalist; the plot thickens further when their ship takes on a cargo of slaves, and is subsequently beached in Honduras (after a mutiny), whereupon the freed slaves "look to her as a goddess and a guide." This was the final book by this Australian author and sometime-politician, who died the same year it was published; she is probably best remembered (if at all) as the author of two books, "Enter Sir John" (co-written with Clemence Dane) and "Under Capricorn," each of which was the basis for an Alfred Hitchcock film, respectively MURDER! (1930) and UNDER CAPRICORN (1949).