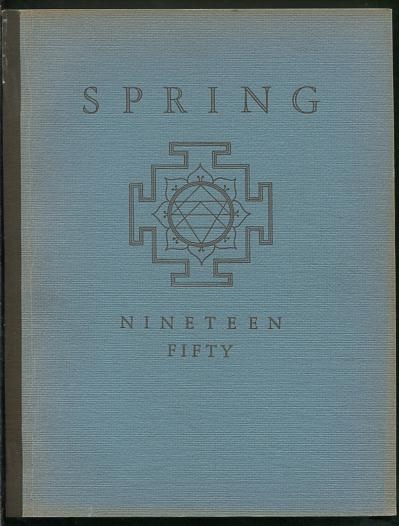 By: (The Analytical Psychology Club of New York)

(8.5 x 11 inches; typescript text, mimeographed on rectos only except for the title/copyright pages) [slight fading around edges of covers, vertical crease adjacent to front hinge with one-inch separation (tear) at bottom, vertical crease in rear cover, residue from former label near top of spine]. 89 + [1] Annual journal of the first Jungian organization in the U.S., founded in 1936 as a forum for the discussion of C.G. Jung's ideas. This issue presents the following six essays: "Shadow, Animus, and Anima," by Dr. Jung himself, translated by William M. Kennedy; "Jungian Psychology in Wartime Germany," by Anneliese Aumuller; "What Can We Ask of Marriage?", by Helen G. Henley; "An Introduction to Astrology," by Hector Hoppin; "Dreams of a Movie-Maker," by James Kirsch; and "The Image of the Marriage Between God and Israel as It Occurs in the Prophets of the Old Testament, Especially Ezekiel XVI," by Riwkah Schaerf. (An errata sheet for the last-named essay is laid in at its opening page.) The Kirsch essay is of particular interest, presenting the author's detailed analysis of three dreams experienced by a screenwriter (who is anonymized in the telling, of course), prefaced by some commentary about the creative plight of the writer in Hollywood, which "with its iridescent glamor and its handsome material rewards, occasions in the creative writer a profound conflict between the fascination this world has, and the compulsion of the still inner voice of his soul, which fills him with creative life, and forces him to express it," but "only in a distorted manner." In the opinion of Dr. Kirsch, however, this isn't necessarily a bad thing, since "one can actually see a favorable sign in the fact that so many writers are neurotic and seeking psychiatric help." Spoken like a man with a thriving practice in Beverly Hills, I'd say, although to be fair it should be noted that Dr. Kirsch was in fact a significant figure in Jungian circles: he was an early student of Jung's, and later a co-founder of the C.G. Jung Institute of Los Angeles, and the two maintained a continuing relationship and correspondence from 1929 until Jung's death in 1961. (A selection of their letters, published in 2011, was lauded by one reviewer "one of the more amazing books to surface in recent publishing history.") The last (unnumbered) page is a list of publications available from the Club.