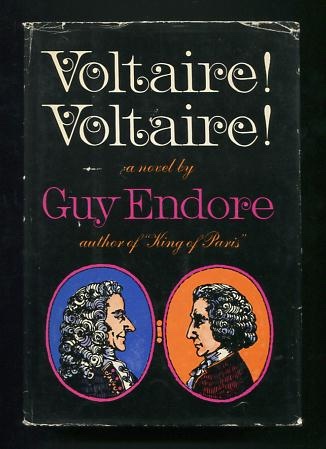 (price-clipped) [solid clean book with no significant wear; jacket shows some edgewear, small closed tear at top of rear panel, minor surface damage to rear panel]. SIGNED by the author (signature only) on the ffep. Biographical novel tracing the parallel lives of Voltaire, "the wittiest, most irreverent, most spectacular philosopher who ever lived," and Rousseau, "the poor, half-educated lad of Geneva who became the most radical, most talked-of philosopher (after Voltaire) of Europe." Endore, a successful screenwriter and novelist, was also a political activist and pamphleteer who became involved in many left-wing and anti-racist causes (notably the "Sleepy Lagoon murder" in Los Angeles in 1940); a member of the Communist Party, he somehow managed to avoid being hauled up before HUAC in the 1950s -- although he was blacklisted nonetheless. Signed by Author