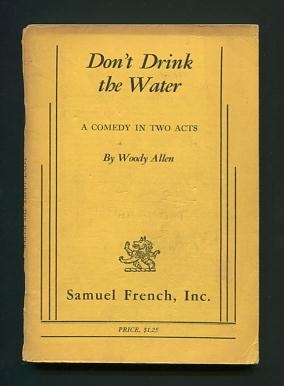 Don't Drink the Water; a comedy in two acts

[an "actor-used" copy with extensive underlining and annotation (see notes), worn along spine, some dog-earing to covers and early pages, some discoloration and light soiling to covers, slight splitting at both ends of spine]. (stage diagram) Allen's early theatrical success, filmed in 1969 under the unsubtle direction of Howard Morris, with Jackie Gleason taking over the role played by Lou Jacobi on the stage, as head of an American family trapped in an unnamed "Middle-European" country behind the Iron Curtain; filmed again for TV in 1994, with Allen himself directing and starring. This particular copy of the play belonged to actress Fritzi Burr (whose name and address appear on the title page), and has her lines as "Marian" extensively underlined in red and black ink throughout, along with occasional stage directions and reminders-to-herself in the margins (usually in pencil). In addition, she has written in the names of some of the other actors in this production on the page listing the play's characters; these include F. Murray Abraham, Dick Van Patten, and Hans Conried (in the Jacobi role). My research has not definitively dated this particular production; one of Abraham's biographies states that he appeared in the play in "various cities" in 1966-67, which suggests it might have been the first national touring company, but I've also found specific reference to this ensemble appearing in a production that played a week in Ft. Lauderdale, Florida, in late December 1967 and early January 1968; Conried was also still appearing in the play as late as 1974. None of the numerous other plays advertised within this volume was published any later than 1967, which again suggests this is a fairly early printing, as does the lack of an ISBN.

Title: Don't Drink the Water; a comedy in two acts

Don't Drink the Water; a comedy in two acts