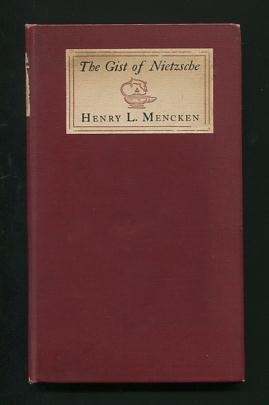 The Gist of Nietzsche

By: Mencken, Henry L. (arranged by)

(maroon boards with paper labels on front cover and spine; no dust jacket) [slight bumping to top corners, a trace of uneven fading to front board, paper spine label a little chipped at edges; two one-time owners' signatures on ffep, indicating purchase dates of 1910 and 1922, and as further testimony to the book's purchase history, it also bears not one but two vintage bookseller's labels (Brentano's, New York, on the rear pastedown; Stratford & Green, Los Angeles, on the front pastedown)]. Excerpts from Nietzsche's writings, arranged thematically (under such headings as "Morality," "Christianity," "Patriotism," "Free Will," "Marriage," etc.). In his brief introduction, Mencken -- who had previously published a treatise on Nietzsche's philosophy, in 1907 (an ad and review comments for which appear at the rear of this volume) -- calls the philosopher "a ruthless destoyer -- the most savage and resolute, it is probable, that Christian morals and Christian civilization have ever had to face." Amen to that!

Title: The Gist of Nietzsche

The Gist of Nietzsche