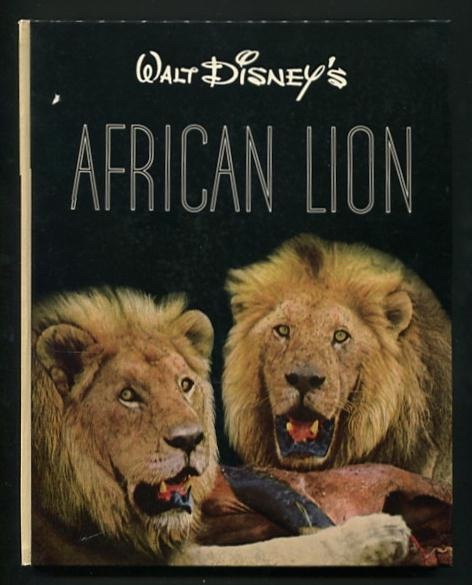 (laminated pictorial boards; no dust jacket, but now protected by a custom-fitted mylar wrapper) [a very nice copy, the covers a little bit rubbed and with one tiny surface nick to the front cover and a short scrape to the rear cover, in both instances exposing a little bit of white beneath the otherwise black surface; there is also a neatly-inked gift inscription (dated April 1957) on the ffep]. (color photographs) Beautifully-produced companion volume to the 1955 Disney "True-Life Adventure Film" THE AFRICAN LION. Per the statement on the copyright page, the book was "designed by Armand A. Bigle and produced by Marc Barraud from the original French language edition 'Walt Disney Lions d'Afrique' [published in 1955]," and was printed in Switzerland. The text, in this edition at least, was credited to James Algar, who began at the Disney studio as an animator in 1934, but after the war was made principal director (and later producer) of the studio's "True-Life Adventure" series of nature documentaries, which were produced between 1948 and 1960. The highlight of the book, though, are the color photographs of African wildlife (not just lions!) by Alfred and Elma [typo'd as "Emma" in the book's introduction, over Walt Disney's signature] Milette, which are tipped onto the pages throughout. (The volume has been carefully checked, and all photos are present and attached; mostly they are 7" x 3-1/2" or 3-1/2" x 3-1/2", although there are seven full-page (7" x 7-1/2") prints.) The Milottes, independent filmmakers before going under contract to Disney in the late 1940s, received cinematography credit on the earlier True-Life Adventure films (which until 1953 were all short subjects) and also on THE AFRICAN LION itself; the series earned a total of eight Academy Awards for the Disney studio, although this particular film wasn't nominated. I can't quite account for the scarcity of nice examples (or any examples) of this book in the current marketplace, but I suspect it may be due to many copies having been either sold to libraries, or placed in the hands of children -- both environments which would have been highly detrimental to the survival of the tipped-on photos.