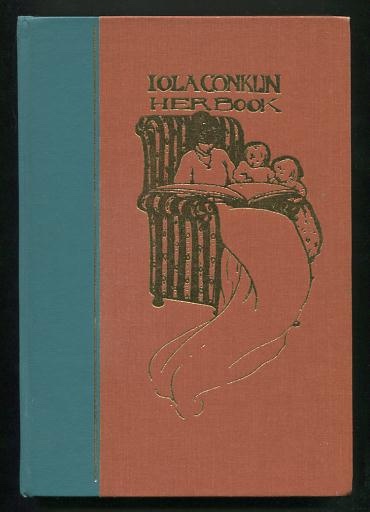 (1/4-bound, teal and rust cloth, gilt decoration on front cover; no dust jacket, probably as issued) [gift inscription on ffep from "Anne & George," the latter possibly George Conklin, although this is unconfirmed]. (B&W photographs, facsimiles) Privately- (and posthumously-) published memoir of Iola Schmidlapp Conklin (1872-1955) -- or, more properly, a partial memoir, since it covers only her early life and ends in 1891, following her courtship by (and proposal of marriage from) a young German banker -- which (per her son's Afterword, which briefly sketches the remaining 64 years of her life!) did not result in a marriage. (By rights the book should have been called "Iola Schmidlapp: Her Book," but let's not quibble. She ultimately married Mr. Conklin in 1906.) The narrative proper is largely concerned with the time her family lived in Europe (both in Germany and Italy), where her father had been advised to seek treatment for various chronic ailments.