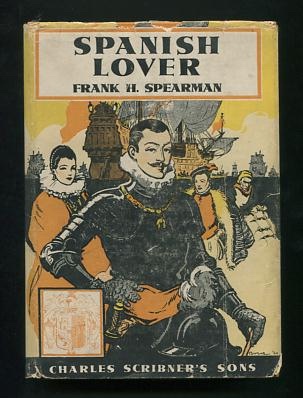 [light shelfwear to bottom edge, dust-darkening to top edge of text block, discreet former owner's signature on ffep and embossed name stamp on 2nd front endpaper (equally discreet); jacket is worn, with tiny tears and minor paper loss at several corners, unobtrusive vertical creases in spine and front panel, a little shallow chipping at top edge of front panel]. (endpapers maps) Historical romance set in 16th-century Spain, centering around the exploits (amorous and otherwise) of Don John of Austria (known as Don Juan de Austria to the Spaniards), "bastard son of Charles V and half-brother of Philip II of Spain." Don John was a bit of a womanizer, and a professional military man best known for leading the Spanish navy to a victory against the Ottoman Empire in the Battle of Lepanto in 1571; it was pretty much all downhill from there, with money woes, ill health and military misfires plaguing him until his death from typhus in 1578. This was a late, and atypical, novel for Spearman (1859-1937), who published his first books in 1900 and worked primarily in the Western genre.