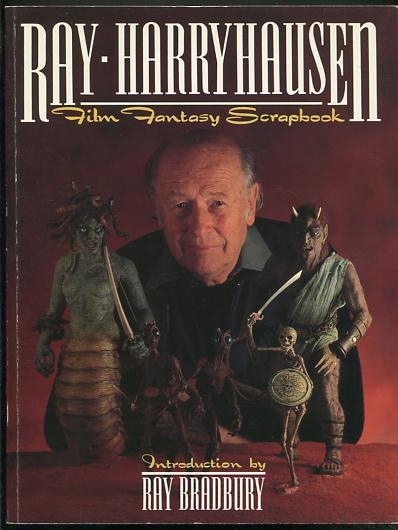 [a little wear along edges and at cover hinges adjacent to spine]. Trade PB (B&W and color photographs) SIGNED by Harryhausen on the half-title page (which is also the front endpaper). Autobiographical career survey of Harryhausen's work, profusely illustrated with photographs and drawings from his own collection. The original edition was published by A.S. Barnes in 1972, an updated printing was issued in 1974 to include THE GOLDEN VOYAGE OF SINBAD (1974), and yet another in 1981 (by Oak Tree Press) to add SINBAD THE EYE OF THE TIGER (1977) and CLASH OF THE TITANS (1981), the latter his final completed feature film. One thing that all these variant printing and editions shared, alas, was the crappy quality of the photographic reproductions, a hallmark (if you can call it that) of A.S. Barnes's film books during the 1960s and 1970s. Fortunately, a couple of years before Harryhausen's death in 2013, a completely re-worked version appeared with a similar title, "Ray Harryhausen's Fantasy Scrapbook," featuring more recently-discovered artifacts and produced at a much higher quality level. This older edition is still a must for the true Harryhausen fan, however, not only because of the autograph but also for the personal and moving introduction by his longtime friend Ray Bradbury, who calls it "the proudest Introduction I will ever write in my life -- written by the boy in me who, at 17, first fell in love with [Harryhausen's] genius and the extensions of that genius, the delicious monsters that moved in his head and out of his fingers and into our eternal dreams." Signed by Author