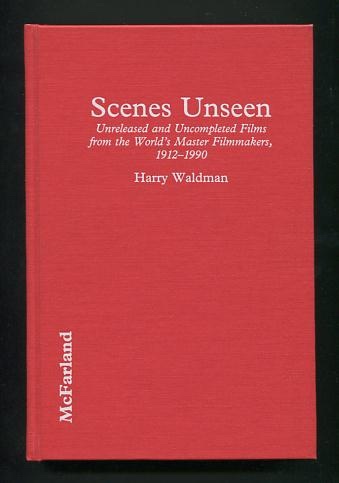 (no dust jacket, as issued) [lovely copy with no discernible wear; would be Fine but for previous owner's inked initials at top of ffep]. (B&W photographs) Examines the uncompleted or unreleased projects of 64 filmmakers, from the famous (Alfred Hitchcock, Charles Chaplin, John Ford, Orson Welles) to the more obscure (Gaston Modot, Laszlo Ranody, Wolfgang Staudte). You'll find all the well-known usual suspects here -- Josef von Sternberg's I, CLAUDIUS, George Cukor's SOMETHING'S GOT TO GIVE, Erich von Stroheim's QUEEN KELLY, Welles's DON QUIXOTE and others, etc. -- but also a lot of equally fascinating films that were shot, and in many cases completed, but for one reason or another never made their way into the public sphere. As the author explains in his introduction, this could happen for any one of myriad reasons: love spurned; conflicts between producers and directors; unmanageable stars; freak accidents; war and economic upheaval; government suppression; inexperience; a filmmaker's "declining capabilities" (a nice way of putting it); or just plain fear.