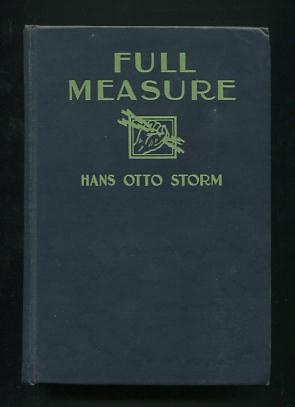 (no dust jacket) [only light wear to book, but top edge of text block is somewhat soiled and lightly spotted, and a few pages are slightly scrunched at the top corners]. SIGNED by the author on the ffep, just below an inscription in another hand, reading "Rose Schroeder / Her Book." The first novel by the least-known of "The Boys in the Back Room," so dubbed by critic Edmund Wilson in his 1940 book of the same name, subtitled "Notes on California Novelists." Although linking Storm with John Steinbeck as practitioners of "more ambitious writing" (in comparison to James M. Cain, John O'Hara and William Saroyan, all of whom he somewhat disses), Wilson managed to overlook this novel entirely, referring to Storm's 1937 novel "Pity the Tyrant" as his first book. (Although to be fair to Wilson, neither did Storm's publishers make any allusion to it in the blurbs for his later books; apparently everybody had just decided that it was an early "failure" and thus best left unmentioned.) Storm, a radio engineer by profession, used his deep knowledge of the early days of that industry -- when the emphasis was entirely on engineering and utilitarian communication and not at all on entertainment -- as the background for the "tragedies and comedies of men and women caught in the whirling wheels of the business machine." The book's fictional corporation, "American National Telegraphs," is headquartered in Pittsburgh, but its enterprises propel the book's protagonists all over the place; major episodes are set in Central America, California (including Los Angeles) and China. Storm had his most productive literary spurt a little later on, turning out three books (and catching Wilson's attention) between 1937 and 1940, but his career was cut short by his untimely, accidental, and somewhat ironic death in late 1941: he had continued to work in the radio industry, and was electrocuted while working on an Army Signal Corps transmitter in San Francisco. Signed by Author