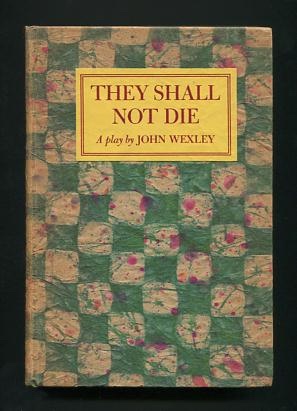 They Shall Not Die

(patterned paper-covered boards; no dust jacket) [slight bumping to bottom corners, some fading to spine, tiny tear at top of spine; firmly bound and internally clean]. Dramatization of the Scottsboro Boys case and trial, by a playwright who went on to a relatively brief screenwriting career before his political associations caught up with him and got him blacklisted. The original Broadway production starred Claude Rains as attorney "Nathan G. Rubin," a fictionalized version of Samuel Leibowitz; also in the cast were Tom Ewell, Ruth Gordon, Dean Jagger and Erskine Sanford. Wexley had previously scored a hit with his prison drama "The Last Mile," which was filmed twice, in 1932 and 1959.

Title: They Shall Not Die

They Shall Not Die