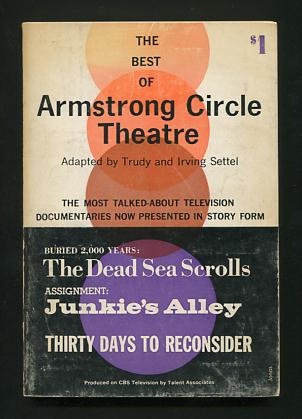 The Best of Armstrong Circle Theatre

By: Settel, Trudy and Irving (adapted by)

[covers rubbed and edgeworn, a little fading to spine; binding solid, internally clean]. Trade PB "The most talked-about television documentaries now presented in story form." Early examples of the "docu-drama" form; includes adaptations of "Buried 20,000 Years--The Dead Sea Scrolls" (original teleplay by Irve Tunick), " Thirty Days to Reconsider" (original teleplay by Roger Hirson, about a Los Angeles couple who attempt to save their marriage through counseling), and "Assignment--Junkie's Alley" (original teleplay by Mel Goldberg, about an undercover policewoman trying to crack a drug ring in South Philadelphia). The book itself is not illustrated, but there is a black & white still from each of the three programs on the rear cover, and the inside front cover reproduces a sequence of six images from an Armstrong TV commercial.

The Best of Armstrong Circle Theatre