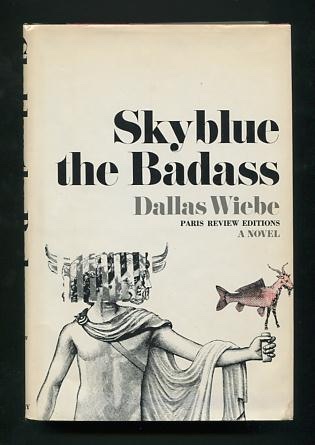 [moderate soiling and light dampstain to top edge of text block (interior of book unaffected), white patch (probably from sticker removal) on ffep, otherwise just lightly shelfworn; jacket slightly tanned at spine, tiny stain at bottom right corner of front panel]. The first of only two published novels by this Kansas-born author (1930-2008), a ribald satire that became a small-scale literary cause célèbre after an excerpt published in The Paris Review in 1967 ignited a somewhat bizarre censorship attempt in the Long Island town of South Farmingdale, N.Y.; in the course of the kerfuffle, TPR editor George Plimpton interceded to speak out against the censorship, and subsequently agreed to published the full novel under the Paris Review Editions imprint. "Skyblue," the book's protagonist -- "the eternal striver who knows we are all losers, the observer who feelingly shares every experience of nature and mankind and yet continually wonders what the hell he's doing here -- the perfect guide to the inevitable defeat that is life" -- was Wiebe's literary alter-ego, and a figure to which he returned in later stories and essays. Better known as a poet and essayist, Wiebe enjoyed a long teaching career at the University of Cincinnati; at least one critic has declared his work to be in the same darkly comic literary vein as that of Laurence Sterne, Franz Kafka, William S. Burroughs and Flannery O'Connor.