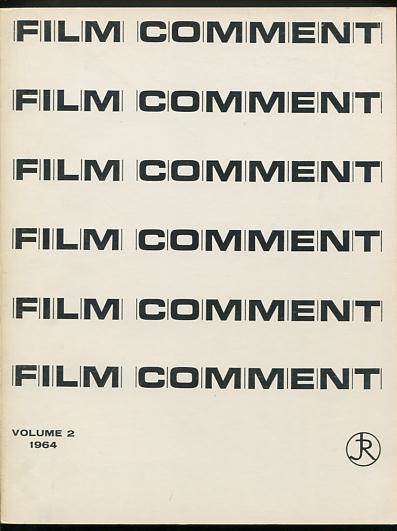 [very light handling wear, short almost-vertical crease at upper right corner of front cover]. (B&W photographs) Reprint volume, reproducing all four issues of Volume 2 (No. 1, Winter 1964; No. 2, Spring 1964; No. 3, Summer 1964; No. 4, Fall 1964). By the third issue there were five people listed on the masthead as regular contributors (Robert Connolly, Edith Laurie, Harriet Polt, Stephen Taylor, and Yale Udoff), but flipping through the contents pages one runs across articles or reviews by such notables as James Blue, Andrew Sarris, Morris L. Ernst, and even Margaret Mead. In its early days, FC was more oriented towards "art" films (whether international or American) than it was to become in later years; among the filmmakers whose work is discussed or reviewed in these four issues are Tony Richardson, Emile de Antonio, the Maysles Brothers, Shirley Clarke, Barry Mahon, Ernest Pintoff, Carl Foreman, Roberto Rossellini, Bruce Baillie, and Gregory Markopoulos. There is also coverage of film festivals (particularly the New York Film Festival), and quite a bit of discussion about topics relating to film education. Original copies of individual early issues of this influential publication are quite scarce; this is a more economical and efficient way to fill out your collection. ***NOTE that we have many more individual issues of this title (and other film magazines) in stock, and welcome your inquiries.