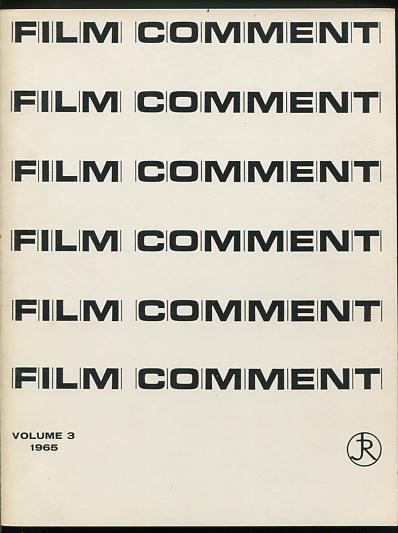 [very light surface wear to covers]. (B&W photographs) Reprint volume, reproducing all four issues of Volume 3 (No. 1, Winter 1965; No. 2, Spring 1965; No. 3, Summer 1965; No. 4, Fall 1965). The issues are a bit longer than in the previous year (78, 80, 88 and 88 pages respectively), and one can also observe the editorial policy moving just a bit more in the direction of mainstream cinema (or perhaps mainstream cinema was starting to redefine itself as a bit more "artistic"). Included are articles on: Leni Riefenstahl (the cover story of the Winter 1965 issue is "Comeback for Leni Riefenstal"); WOMAN IN THE DUNES (Hiroshi Teshigahara); Robert Rossen; Richard Leacock; Willard Van Dyke; Pare Lorentz; Jacques Demy; Ingmar Bergman; Ralph Nelson; Otto Preminger; TOKYO OLYMPIAD; Slavko Vorkapich; DR. STRANGELOVE; THE WAR GAME (Peter Watkins); Pier Paolo Pasolini; Alvah Bessie; the Hollywood blacklist; and many other topics. Also featured are numerous book reviews. Original copies of individual early issues of this influential publication are quite scarce; this is a more economical and efficient way to fill out your collection. ***NOTE that we have many more individual issues of this title (and other film magazines) in stock, and welcome your inquiries.