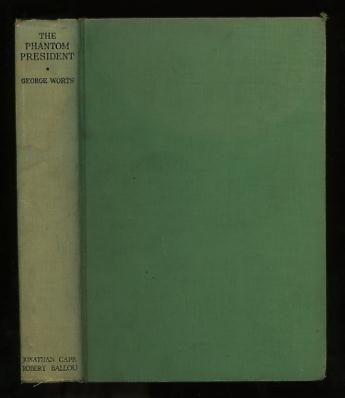 (no dust jacket) [worn copy, fading to spine cloth, light bumping/fraying at extremities, tiny tear in cloth at top of spine; binding intact, internally clean]. Political fantasy novel about a Presidential candidate who's qualified (he's a self-made millionaire industrialist) and sincere, but unelectable due to his utter lack of personal charisma. His brain trust of handlers and backers, however, come up with a diabolical scheme: they find a guy who's brimming over with personality -- and just conveniently happens to be a dead ringer for their candidate -- and proceed to have him stand in for the real thing in all his scheduled public appearances. This achieves the desired result -- a landslide victory -- but things get a lot more complicated when the deception is carried all the way into the White House. (What could go wrong, eh?) The novel was filmed as "a diverting farce with musical comedy interludes" (NYTimes) by Paramount in 1932, with George M. Cohan -- whose heyday as a Broadway star and composer was already fading into the past -- making his talking-film debut in the leading (dual) role.