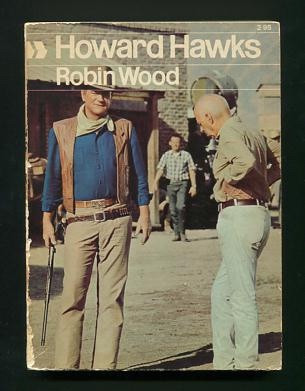 [covers are edgeworn, especially along front hinge, which is somewhat deterioriated, with the front cover just beginning to separate from the spine at the bottom; the binding itself is solid, however, and the text clean]. (Cinema World, No. 7) Series Trade PB (B&W photographs) SIGNED on the title page by Howard Hawks. This was the first serious book in English to be devoted to Hawks's work, by one of his earliest champions (at least on this side of the Atlantic). Wood (1931-2009) was an influential British-born film critic whose prose style was an important complement to his critical insights; he had been an early contributor to the U.K. journal "Movie," the first English-language periodical to fly the auteurist banner. This was his second book; his first, on Alfred Hitchcock, was similarly ground-breaking. It's highly uncommon to find this (or any) book autographed by Hawks, who was not much known for giving either critics or fans much more than the time of day, regardless of whether or not he was wearing a watch. Signed by Biographee