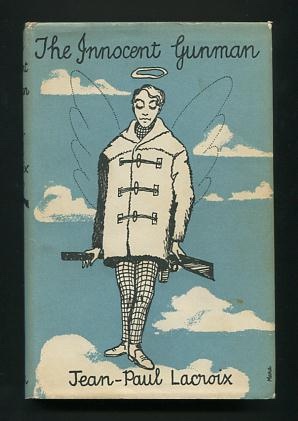 By: Lacroix, Jean-Paul (translated from the French by Hugh Shelley)

(price-clipped) [minor shelfwear, spine a bit turned; jacket quite nice, would rate Near Fine but for the somewhat clumsy price-clipping (which removes just a tiny corner of the jacket flap text)]. Comic novel about "Fiérot Le Pou" (get it?), a gangster who "had risen -- over forty years and via Sing Sing and Alcatraz -- to control PRA, the largest criminal combine in France." Yep, he's a big shot, all right, but he's also got a big problem: his only son, Frankie, despite being "born with a silver flick-knife in his fingers and with all the promise of a golden future as a killer," wants no part of the family business, having designs on becoming a poet and a schoolmaster. His old man decides to break his spirit by sending him for "training" in Marseilles, Palermo, London and New York, and Gallic hilarity ensues. Published in France in 1954 as "Le Gangster aux Etoiles."

Author: Lacroix, Jean-Paul (translated from the French by Hugh Shelley)