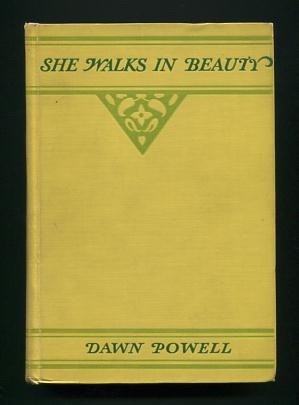 She Walks in Beauty [*SIGNED*]

(yellow decorated cloth; no dust jacket) [spine very slightly turned, minor shelfwear to bottom edges, a bit of dust-soiling to top edges of covers and text block, a little darkening to spine cloth]. INSCRIBED and SIGNED by the author on the ffep: "To Harold Swanson -- / You don't have to / read this but / honestly you ought to / have it around if / only to throw at / contributors. / Sincerely / Dawn Powell / March 30, 1928." The great American author's "first" novel. (At least that's what she called it herself, preferring not to mention her ACTUAL first novel, "Whither," published three years earlier. Hey, even the great ones are entitled to a mulligan, right?) Inscribed copies of Powell's novels are uncommon, and this is also a terrific association copy: the inscribee, later to set up shop as "H.N. Swanson" in Hollywood, where he was the most successful writers' agent of his time, was in 1928 still the editor of the widely-circulated "College Humor" magazine, a post he'd held since the early 1920s. The magazine solicited contributions from numerous well-known writers (including F. Scott Fitzgerald), and the contacts made by Swanson during his editorial tenure served him well as he began to develop his Hollywood client list in 1934. Powell's biographer Tim Page identifies "College Humor" as one of the magazines to which she was a regular contributor during the 1920s, and although neither the specific stories nor the frequency of their appearance have been identified, the familiar and bantering tone of her inscription strongly suggests that she and Swanson had been in regular communication. In any event, Swanson was certainly an important publisher of Powell's early work, and this inscription testifies to a close and significant association. (Both the first and second printings were in March 1928, the same month in which this book was inscribed.) Signed by Author

Title: She Walks in Beauty [*SIGNED*]

She Walks in Beauty [*SIGNED*]