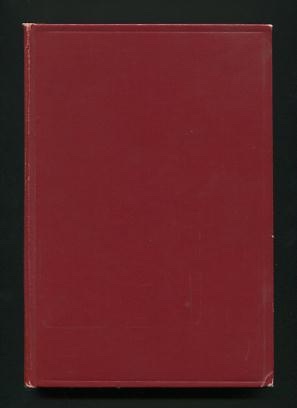 (no dust jacket) [ex-library book (stamped as such at tops of both pastedowns and both endpapers, with some label-removal scarring on the front pastedown), small call number in white on spine, otherwise clean with just moderate wear to extremities]. (B&W drawings, some with color added) An odd little book, framed as a "collection" of narrative accounts of dreams experienced by a single individual -- presumably the author, although he doesn't ever come right out and say that, maintaining his third-person reference to "the dreamer" throughout. By his own account, he began recording his dreams in 1897, just after he'd graduated from "a scientific school"; elsewhere he states that the dreamer "is not a trained psychologist [and] has not made any extended study of dream literature but has chosen to remain an amateur [and] disclaims any right to pose as an oracle where the dreams of other people are involved." (He does, however, admit to having read Havelock Ellis's treatise on dreams "with singular stimulation and a sense of cordial agreement," and also reports that "his reaction to Freud has often been hostile.") Best of all, he also made crude and moderately surreal sketches to illustrate his dreams, approximately two dozen of which accompany the text; my favorite is probably "A Postmortem Examination," which depicts him enjoying "the unusual if gruesome privilege of examining his own dried and empty skull."

Illustrator: Illustrated by the author

Categories: The Odd and Unusual,