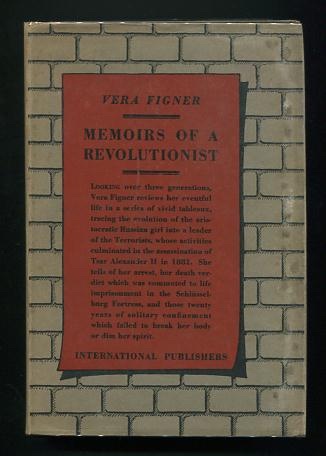 [shelfworn, bumping/light fraying to corners, rear hinge cracked; jacket somewhat age-toned, scraped/scuffed along right edge of front panel]. (B&W plates) Autobiography of the noted Russian radical (1852-1942), born into aristocracy but radicalized in her youth. She eventually became one of the key members of the revolutionary group Narodnaya Volya (The Will of the People) and was an active participant in its paramilitary wing, whose most notable achievement was the assassination of Tsar Alexander II in 1881. "She tells of her arrest, her death verdict which was commuted to life imprisonment in the Schlusselburg Fortress, and those twenty years of solitary confinement which failed to break her body or dim her spirit." Released from prison into internal exile in 1904, Figner was permitted to leave the country after a couple of years but returned in 1915. Her memoir was translated into many languages and brought her worldwide fame, although by the time of its publication she had become disllusioned with the October Revolution (and critical of Stalin in particular). Uncommon in dust jacket.

Title: Memoirs of a Revolutionist