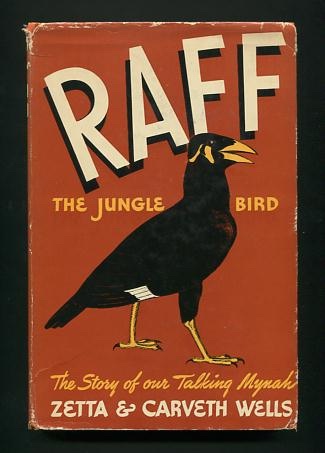 Raff, The Jungle Bird: The Story of Our Talking Mynah [*SIGNED*]

By: Wells, Zetta and Carveth

[very light bumping at several corners, small newspaper obituary of Raffles affixed to ffep]. (pen and ink drawings) SIGNED by the authors on the half-title page (Zetta with her first name only, Carveth with his full name and with an additional small sketch of an elephant added). The story, told by the noted explorer/world traveler/lecturer/filmmaker Wells and his wife, of their discovery, adoption, training and exploitation (most of which still lay ahead when the book was published) of what undoubtedly was the most famous Mynah bird in history (has there even been another?) -- or perhaps I should say Mynah birds, since rather than retiring the "Raffles" name after the initial bird croaked (sorry) of pneumonia in 1947, it was subsequently bestowed on at least one bird (and who knows how many more). Actually, Mr. Wells himself fell off life's perch in February 1957, but Zetta and the chatty bird carried on -- or tried to, anyway. Later that same year she appeared with the then-current "Raffles" on the TV quiz show "You Bet Your Life," on which occasion the bird in question let down the side (and tarnished his heritage) by failing to respond to most of Zetta's cues, to the bemusement of host Groucho Marx. (Thanks to YouTube, it's possible to view this entire hilarious episode online. It's not recorded whether or not this national TV debacle forced Zetta and the Reluctant Raffles into ignominious retirement.) The original Raffles had made numerous appearances in veterans' hospitals, and according to Wells (quoted in the obituary affixed to the front endpaper) "sold $1,000,000 in War Bonds by his own efforts and, on the air with Eddie Cantor, sold $3,000,000 more." The only thing that surprises me about the whole thing is that nobody's yet composed a Wikipedia page about Raffles (or about Carveth Wells, who was a pretty interesting guy, for that matter). Signed by All Authors

Title: Raff, The Jungle Bird: The Story of Our Talking Mynah [*SIGNED*]

Raff, The Jungle Bird: The Story of Our Talking Mynah [*SIGNED*]