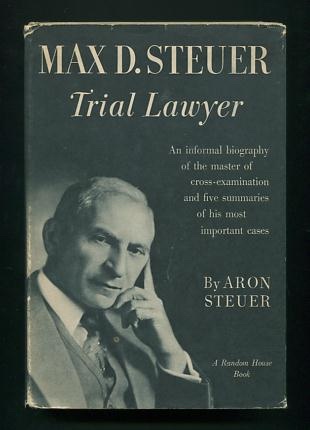 (price-clipped) [light age-toning to fore-edge, minimal shelfwear to bottom edges of covers, faint remnants of some erased pencil underlining in the introductory chapter; jacket shows a little wear at extremities, light soiling and a couple of short creases to rear panel]. (B&W photo frontispiece) Sort of a portrait-in-action of this "master of cross-examination," assembled by his son, who opens his introductory chapter with a disclaimer: "This is not a biography." Although he does provide some sketchy biographical details of his father, the bulk of the book is made up of summaries of five of the elder Steuer's most important and challenging cases, each of which includes lengthy excerpts from court transcripts. One of the five cases discussed is considered the most famous of Steuer's career: People v. Harris and Blanck, the prosecution for manslaughter brought against the owners of the Triangle Shirtwaist Factory in the wake of the deadly 1911 fire that killed nearly 150 of its workers; another is People v. Rickard, in which Steuer acted as counsel for famed sports promoter Tex Rickard, who was accused of having had sex with a 14-year-old girl. (In the Triangle case, Steuer got the owners off by discrediting the testimony of a key prosecution witness, Kate Alterman, one of the factory workers who had survived the fire; in the Rickard case, he managed to transform the victim into (in his son's words) "a little tart" in the eyes of the jury, and Rickard was acquitted. Effective tactics, obviously -- although perhaps less than admirable.) Fairly little has been written about Steuer, who left behind no writings pertaining to his legal philosophies or strategies.