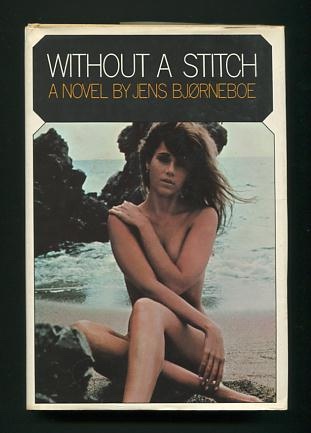 By: Bjørneboe, Jens (translated from the Norwegian by Walter Barthold)

[nice clean book with just the teensiest bumping to the bottom corners; jacket also very nice, but with a few pen-point indentations (no ink marks, however) on the front panel, as though someone once used it momentarily as a scribble pad]. First-person narrative novel about a "19-year-old girl troubled by her frigidity with boys" who discovers her Lesbian libido via a serious fight with a girlfriend, "complete with scratching, hair-pulling, and fists." Purportedly "widely published in Europe" without incident, it ran into trouble in the author's native Norway, with their Supreme Court banning the book and fining Bjørneboe for "sexual nihilism." The book seems to have not been published in the U.S. until November 1969, just a month or so before the release of a Danish-made film adaptation; it was the latter event that led Grove to issue a new dust jacket featuring a still from the film (which appears on the second and all subsequent printings). However, there may have been another reason the original jacket was "retired." Take another look at that naked beach babe: it's none other than Jane Fonda, and although the photo itself is properly credited to the photographer, she might as well have been an anonymous model. But the weird thing is that Jane was hardly an unknown at the time: on-screen since 1961, she'd reached the peak of the first (sex-kitten) stage of her career by starring in her then-husband Roger Vadim's ultra-campy 1968 film BARBARELLA. Nor was this particular nude-ish photo session exactly obscure: a very similar shot had been given major exposure (sorry) in a March 1968 issue of Life Magazine (in a cover story on BARBARELLA), and yet another was mass-marketed as a male-dorm-room-suitable poster -- which poster, in turn, would be re-purposed a few years later as a vehicle for expressing anti-"Hanoi Jane" vitriol. The point being: did Grove's decision to use this already-close-to-iconic celebrity image to package their titillating Scandinavian import represent prescient marketing boldness, or a simple unlicensed "oops"? The episode (if it can be called that) seems to have gone unremarked-upon in any of the literature on Ms. Fonda, so any claims that she might have effected its "withdrawal" or "suppression" should be taken with a grain of sand, pending actual, you know, evidence. Do note, however, that second and subsequent printings (with the film-still jacket) are considerably more common than the "naked Jane" first.

Title: Without a Stitch

Author: Bjørneboe, Jens (translated from the Norwegian by Walter Barthold)