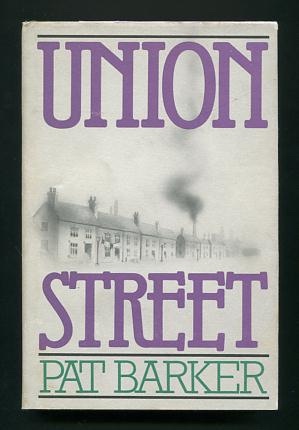 [very nice copy, tiny bit of fingertip-smudging on top of text block nearest spine, but no real wear to book itself; jacket shows just minimal surface wear and the faintest bit of soiling]. "Union Street could be any street, anywhere. But in this powerful novel it lies at the heart of a city in the industrial Northeast of England, a wasteland of decaying streets and partly demolished houses. Set in the winter of 1973, a cold winter of unemployment, the year of the coal miners' strike, this is the story of seven women -- and their men -- who lived on that street." The first published novel by this future Man Booker Prize-winner, it was officially the source for the 1990 American film STANLEY AND IRIS, starring Jane Fonda and Robert DeNiro, the last movie directed by Martin Ritt; however, the only real connection between book and movie seems to reside in the name of the character played by Jane Fonda, "Iris King," who was one of the seven working-class women whose interlinked stories are told in the book. (The characters and relationships were otherwise almost wholly invented for the movie; plus the setting was changed from Northeastern England to Connecticut, so there's that. But not to worry: the book's still in print, and the movie has receded into obscurity.)