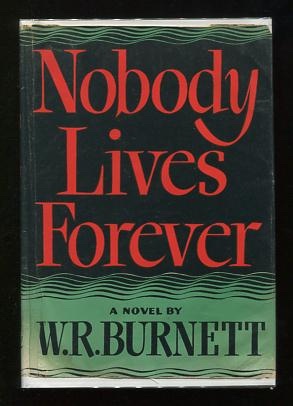 [light soiling to top and bottom edges of covers, flowery gift inscription (non-authorial) on ffep, bookplate on front pastedown; jacket is trimmed roughly 1/8"-1/4" along top and bottom edges, small stain at upper right corner of rear panel]. "The adventures of a big-time swindler, who starts a carefully organized campaign to swindle a rich, unworldly widow and becomes entangled in a tragic situation impossible to foresee." Basis for the 1946 Warner Bros. film of the same name, starring John Garfield and Geraldine Fitzgerald. The film had a long gestation period: an original Burnett story by that title (although it's not clear that the plot was the same) was purchased by Warner Bros. in August 1941, and its upcoming production was announced to star Humphrey Bogart and Ann Sheridan. According to Robin Smiley ("Firsts," January 2002), Burnett had finished the screenplay for the planned film by mid-1943, well before the book itself hit the shelves, and production was completed on the film in late 1944 by director Jean Negulesco, although "for some unknown reason" (Smiley) the studio didn't deign to release it until late 1946, purportedly after Garfield's star had ascended a bit after the success of MGM's THE POSTMAN ALWAYS RINGS TWICE. (There may be more to the delay than that, however; some deeper research is clearly called for.)