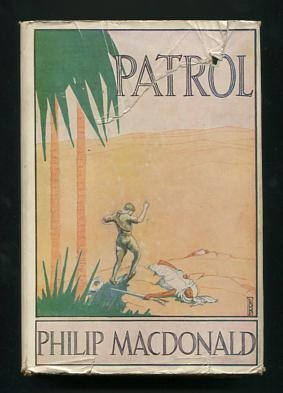 [minimal shelfwear, faint soiling to edges of text block, vintage bookseller's label (Newbegins, San Francisco) on rear pastedown; jacket has a rather nasty ragged diagonal tear across the top of the front panel, with a small bit of associated paper loss, a few tiny tears and a bit of wrinkling along bottom edge]. World War I novel, derived from the author's own experiences (as were most British war novels of the 1920s and 1930s), telling of "the grisly adventures of an English patrol fighting Arabs in Mesopotamia . . . a small party of cavalrymen who, by mischance, are left alone to face ordeal." Filmed twice: in England in 1929 (a late silent) as LOST PATROL, and, more memorably, by John Ford at RKO in 1934, as THE LOST PATROL, with Victor McLaglen, Boris Karloff, Wallace Ford and Reginald Denny heading the cast.