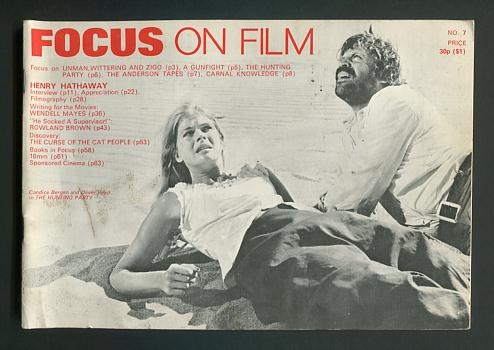 [minor edge- and surface-wear to covers]. (B&W photographs) Contents: a special section devoted to director Henry Hathaway, featuring an interview, an appreciation (by Kingsley Canham), and a filmography; an article on " Writing for the Movies" by Wendell Mayes; an article on director/writer Rowland Brown; a retrospective review of THE CURSE OF THE CAT PEOPLE (co- directed by Robert Wise and Gunther Fritsch; produced by Val Lewton), including recollections of the film's screenwriter, DeWitt Bodeen; reviews (with related filmographies) of UNMAN, WITTERING AND ZIGO; A GUNFIGHT; THE HUNTING PARTY; THE ANDERSON TAPES; and CARNAL KNOWLEDGE.