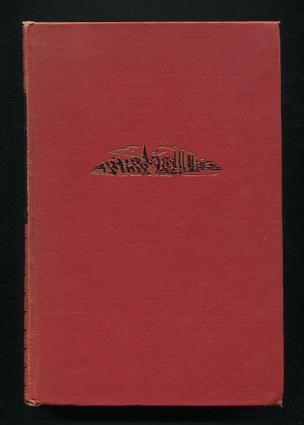 And So Dedicated: An American Novel

(no dust jacket) [good sound copy, internally clean, mildly shelfworn, light dust-soiling to top of text block, very light bumping to bottom corners]. Pseudonymous novel by Stephen Longstreet, set in the 1920s in a fictional Midwestern town, "Corinth." The plot centers around a romantic triangle that culminates in a scandalous double murder, and is set against the background of labor troubles. The author, in a note to the reader, explains that his purely-invented "Crime of the Century"-type situation "owes nothing to the real events [of the 1920s] except the pure frenzy, the emotion with which we took such things in those days." Longstreet, who began his professional life as an artist, began writing for radio in 1933 and went on to a multi-faceted career as a novelist, playwright, screenwriter, art critic, lecturer, journalist, and jazz historian. He wrote dozens of books (one source says "over 100," but honestly, I haven't counted), both fiction and nonfiction, and employed as many as a half-dozen pseudonyms. His best-known screenwriting credit was probably for THE JOLSON STORY (1946), and he also co-wrote the book for the 1947 Broadway musical "High Button Shoes," adapted from his own semi-autobiographical novel, "The Sisters Liked Them Handsome." ("Thomas Burton" appearse to have been Longstreet's "serious fiction set in the 1920s Midwest" pseudonym, as the only other book for which he used it was the 1941 novel "Bloodbird," which dealt with the conflict between farmers and industrialists over the building of a hydroelectric dam.)

Title: And So Dedicated: An American Novel

And So Dedicated: An American Novel