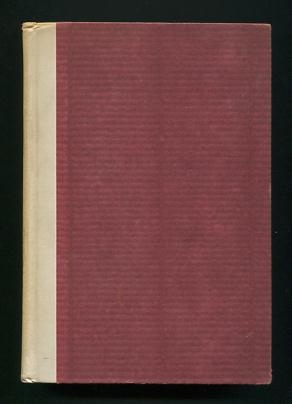 Life Demands! and Other Plays

(no dust jacket) [solid copy, moderate shelfwear to bottom edge (slight cracking & exposure of boards at bottom corners), mild yellowing/discoloration to spine cloth, attractive custom vintage bookplate on front pastedown]. Contents: "Life Demands!" (a play in four acts), and five one-act plays: "Time's Fool"; "Out of the Dark"; "The Law of Compensation"; "The Age of Discretion"; and "Vestiges." Henry Berman would appear to define the term "obscure playwright": he apparently never had a play produced on Broadway, nor was I able to turn up any screenwriting credits (screenwriting being an enterprise in which even an obscure playwright might have been able to earn a few bucks in those days). He seems to have been the same Henry Berman who published three novels between 1906 and 1909 (cf. Smith, American Fiction 1901-1925), as well as another unknown play, "The Faith of the Fathers," published (but not, as far as I know, produced) in 1922. (There was also a Henry Berman who was the general manager of Universal Pictures in the 1920s (and father of Pandro S. Berman, who produced numerous classic films at RKO and later MGM), but that would seem to have been a different guy altogether.)

Title: Life Demands! and Other Plays

Life Demands! and Other Plays