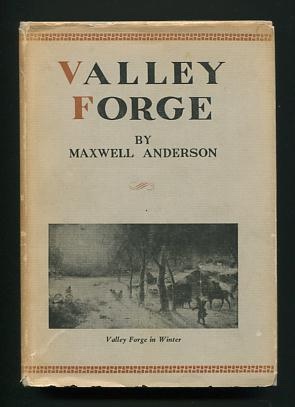 [front hinge a little weak, slight fading to cloth at edges of covers and spine, attractive full-page vintage bookplate on half-title page; jacket spine is browned, jacket has some shallow chipping along top and bottom edges, minor paper loss at corners]. (endpaper maps) Historical drama about the difficulties endured by General George Washington's army during the Winter of 1777-78, "the dark days [when] the fortunes of the rebellious colonists were at their lowest ebb and defeat at the hands of Great Britain's trained mercenaries seemed inevitable." After a month or so of out-of-town tryouts and tinkering, the play opened on Broadway in December 1934, but ran for only 58 performances. It was reported at the end of its run that a movie version was in the works at Columbia Pictures, but nothing ever came of it, although a couple of live television versions were broadcast in the early 1950s, and a "Hallmark Hall of Fame" TV-movie adaptation was produced in 1975.