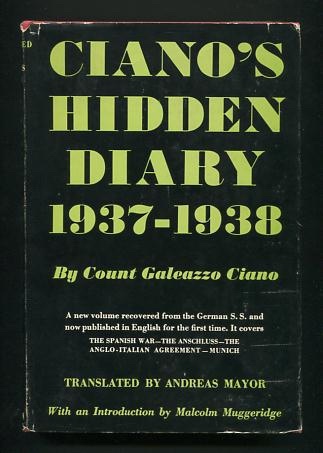 By: Ciano, Count Galeazzo (translated from the Italian, and notes by Andreas Mayor)

[nice clean book, very slight shelfwear to bottom edge, minor bumping to top corners; jacket shows a bit of wear at edges and corners, minimal paper loss at top of spine, a couple of tiny edge-tears, some smudging at upper left corner of rear panel]. "When Edda Ciano escaped to Switzerland in 1944 she brought with her five of the seven notebooks which constitute her husband's entire diary. For a time the other two were thought to have been destroyed. They were recovered in 1947 and thus [this book], packed with undisclosed information, completes the widely read and discussed document." Among the events covered during these crucial two years were the Spanish Civil War, the Austrian Anschluss, the Anglo-Italian Agreement, and the Munich Agreement. Ciano was Italy's Foreign Minister under Mussolini; Mussolini was also his father-in-law, which unfortunately for Ciano didn't prevent him from being executed for treason by a firing squad in January 1944. Introduction by Malcolm Muggeridge.

Author: Ciano, Count Galeazzo (translated from the Italian, and notes by Andreas Mayor)