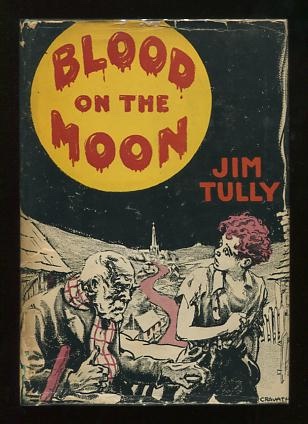 Blood on the Moon [*SIGNED*]

[moderate shelfwear to bottom edge, a couple of pages roughly opened near end of book, minor spotting to top edge of text block; jacket shows wear along top edge, diagonal tear across lower-middle of spine, about a one-inch chunk missing from base of spine INSCRIBED and SIGNED by the author on the ffep: "To Ebba Havez / From a fellow / soldier in the / Battle of Life / Her friend / Jim Tully / 1931." The final installment in what Tully considered his five-volume autobiographical cycle (following "Beggars of Life," "Circus Parade," "Shanty Irish" and "Shadows of Men"), this book essentially picked up where "Shanty Irish" had left off, following the passage of young Jim from a Cincinnati orphanage through his time on the road (and in the boxing ring), to the moment when he resolves to "write or starve." Tully himself stated of the book, in the jacket blurb: "With it, I bid farewell forever, I hope, to that life, the winds of which equally twisted and strengthened me for the sadder years ahead." The title was derived from a phrase used by his grandfather, "Old Hughie," to signify "trouble to sailors and the Irish." (The inscribee of this copy was the widow of songwriter and silent-film scenarist Jean Havez, whose credits include several of Buster Keaton's greatest films, among them SHERLOCK JR. and THE NAVIGATOR. Some time after Havez's untimely death in 1925, she married director Edward Sedgwick, who directed all of Keaton's later features at MGM.) Signed by Author

Title: Blood on the Moon [*SIGNED*]

Blood on the Moon [*SIGNED*]