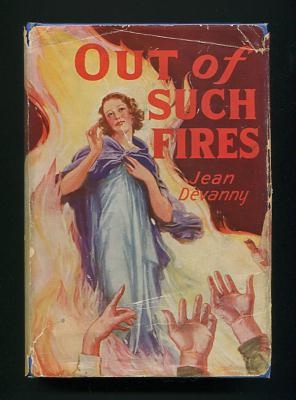 Out of Such Fires

(price-clipped) [light age-toning and mild soiling to edges of text block, a touch of shelfwear to bottom corners; jacket edgeworn, with a bit of creasing, 1-1/2" closed tear at bottom left corner of front panel, minor paper loss at a few corners, tiny chip at top of rear panel, light soiling to rear panel]. "The chief character is an English girl, a writer in search of new experience. She finds it in overwhelming measure when she enters the Jerumba sheep station [in Australia] as a servant. For there she crashes against the antipathy of the vilest woman character that any author has yet conceived -- a walking exhibition of neurotic bestiality that is neither fantastic nor overdrawn." Devanny (1894-1962) was a New Zealand-born writer who became a prominent speaker and activist on behalf of the Communist Party of Australia, and was well-known for her outspoken opinions on sexuality and women's rights. (One on-line reference source states that "her literary contemporaries found her intensity disturbing.") Her books often featured spectacularly victimized but ultimately triumphant women; this general ethos (not to mention their melodramatic nature) lent itself very well to the Macaulay house style of lurid jacket art and provocative blurbing -- not surprising that they were her exclusive U.S. publishers, beginning with "The Butcher Shop" in 1926. She was expelled from the Communist Party in 1941, ostensibly for "moral degeneracy," and later lamented that her involvement with the Party and its causes had prevented her from realizing her full potential as a writer.

Title: Out of Such Fires

Out of Such Fires