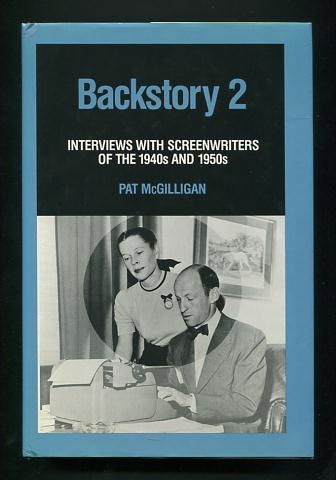 Backstory: Interviews with Screenwriters of the 1940s and 1950s

By: McGilligan, Pat, ed. and intro.

[nice clean copy with no significant wear, blemished only slightly by short diagonal creases at the top corners of several pages (apparently inflicted by a former owner unfamiliar with the concept of a "bookmark"); jacket a teensy bit rubbed, with a minor wrinkle along the top edge of the rear panel]. (B&W photographs) A follow-up to the editor-interviewer's earlier compilation of insightful screenwriter interviews, this volume focusing on a somewhat later generation. The interviews, each of which is accompanied by a brief but informative introduction and a list of the subject's screen credits, are with Leigh Brackett, Richard Brooks, Betty Comden and Adolph Green, Garson Kanin, Dorothy Kingsley, Arthur Laurents, Ben Maddow, Daniel Mainwaring (aka novelist "Geoffrey Homes"), Walter Reisch, Curt Siodmak, Stewart Stern, Daniel Taradash, and Philip Yordan.

Title: Backstory: Interviews with Screenwriters of the 1940s and 1950s

Backstory: Interviews with Screenwriters of the 1940s and 1950s