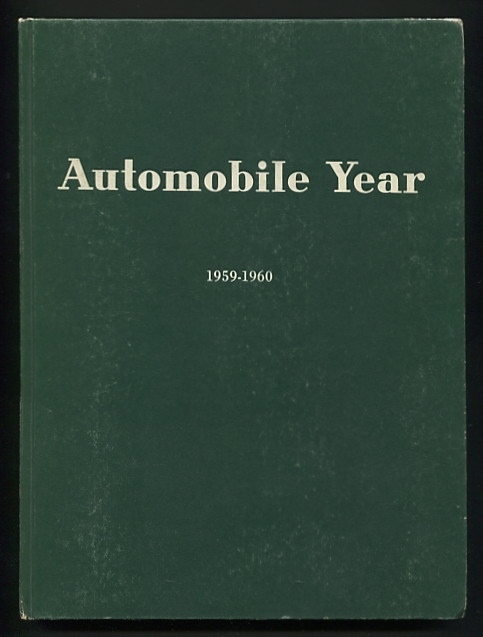 (dark green paper-covered boards with white lettering on front cover and spine; no dust jacket) [moderate wear to corners and edges of boards, some scuffing to covers, faint musty odor]. (B&W/color photos, diagrams, charts, ads, etc.) A thorough review of all things automotive during 1959, divided between general matters (including automobile design and manufacturing) and a review of the year's major races and rallies: the Grand Prix (in Monaco, Belgium, the U.K., Italy, etc.), the Indianapolis 500, etc. Some of the more interesting articles include: "The Influence of Experts on the Conception and Testing of a Mass Produced Car"; "The Italian Line" (a historial survey of the Italian coachbuilding tradition, with many illustrations); a historical survey of Fiat; "The Parking Problem" (showcasing various innovative designs for parking garages); and "One Problem: Three Solutions" (in which three noted auto designers discuss the philosophies behind their small cars, the Austin-Morris Baby Car, the Fiat 600, and the Triumph Herald). Profusely illustrated throughout, the book contains numerous photographs and technical specifications for cars made in the U.S., Great Britain, Italy, Germany, Japan, Sweden, and elsewhere; included is a double-page fold-out drawing of the Aston Martin DBR 1/300. One rather amusing editorial note states that in addition to the regular staff employed each year to turn out the English, French and German editions, this year "for our accounts of the 1959 races we called upon a specialist who writes in a fourth language: that used by some of the motor racing enthusiasts of the United States." (I guess they must have had some complaints about sounding too European.)