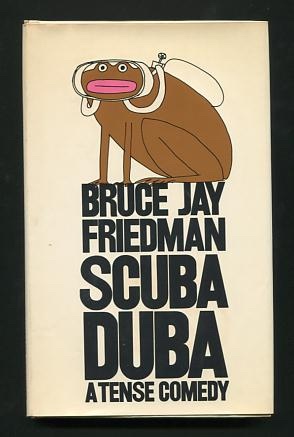 [book and jacket both exceptionally nice, with just a touch of soiling to the bottom edges of the book's covers]. "The cast: The Hero ('a warm, glandular human being') -- a sort of 35-year-old Jewish intellectual Candide; His Wife (she has just left him for a Negro skindiver); The Girl in a Mauve Bikini (she tries to console him); The Skindiver and his Distinguished Acquaintance -- plus a Gendarme, a Landlady, a Tourist, a Fille de Joie, The Hero's Psychiatrist, and, inevitably, The Hero's Mother (long-distance from New York)." Jerry Orbach played the lead in the original off-Broadway production, with Cleavon Little as the Skindiver (aka Foxtrot); Judd Hirsch and Conrad Bain were also n the cast. This was the author's first play, following the success of his novels "Stern" and "A Mother's Kisses."