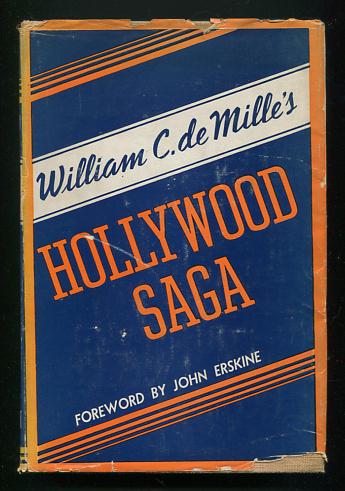 Hollywood Saga [*SIGNED* by both William and Cecil]

[front hinge cracked, rear hinge weak, but otherwise with just light shelfwear and moderate age-toning to edges of text block; unpersonalized "Ex Libris" bookplate on front pastedown, plus small stamped bookstore name (Larry Edmunds Cinema Bookshop); jacket has a half-dozen or so shallow chips, some scuffing and general wear]. (B&W photographs) SIGNED and generically inscribed ("Sincerely") by the author on the title page, and additionally SIGNED (and also generically inscribed, "Greetings from") by his more famous brother, producer-director Cecil B. DeMille, on the facing page, beneath the frontispiece photograph of himself in action, directing THE BUCCANEER. William, three years Cecil's senior, had already established himself as a successful playwright, with nine of his plays produced on Broadway between 1905 and 1913; nonethless, almost as soon as his younger sibling had begun to make his big splash in the movies (the signal event in that regard being the 1914 feature THE SQUAW MAN), William abandoned the theatre for Hollywood. Over the course of a decade and a half, as Cecil charted his relentless rise to the pinnacle of movie prestige and influence, William turned out his own steady stream of respectable but not spectacular work (he had a hand as writer and/or director and/or producer in about 60 films before his career faded out in the early 1930s), but remained in the shadow of his more ambitious and self-promoting brother throughout his life, and beyond. (And fair or not, it's a judgment that's unlikely to be revised, let alone reversed, since only a handful of William's films are known to exist today.) By the time he set down this "saga," he was well out of the movie game, having begun a transition from one-who-does to one-who-teaches in 1929, when he was among the founders of USC's film program. The book is an admixture of autobiography, family memoir (there is inevitably much about C.B.), and pontification about the Motion Picture Art, the State of the Industry, the Real Hollywood, and such matters; DeMille biographer Robert Birchard described it as "an attempt to justify his life's work," and the compilers of the noted bibliography "100 Books on Hollywood and the Movies" noted that it "has the added twist of being the journal of a disappointed man." Signed by Author

Title: Hollywood Saga [*SIGNED* by both William and Cecil]

Hollywood Saga [*SIGNED* by both William and Cecil]