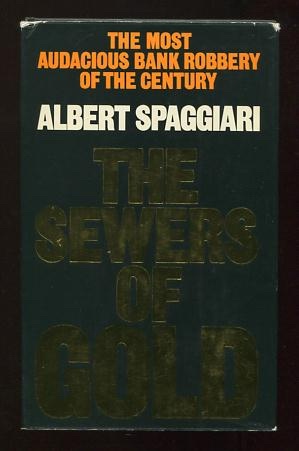 The Sewers of Gold

[bottom corners moderately bumped, otherwise a nice clean book with minimal wear; jacket shows some wear at extremities, particularly some rubbing and dog-earing to the top corners]. (B&W photographs, map) True-crime account of "the most audacious bank robbery of the century," perpetrated on a Société Générale bank in Nice, France, in July 1976. The author was "the mastermind behind the caper, [an] adventurer and dreamer, who pulled it off and got away." He was briefly captured later that year, but soon escaped from jail; although eventually sentenced to life in prison in absentia, Spaggiari remained at large until his death, reportedly "under mysterious circumstances," in 1989. Three feature films (two French, one British) have been inspired by the robbery. The original title of the book, published in France in 1978, was "Les égouts du paradis."

Title: The Sewers of Gold

The Sewers of Gold